﻿ Woman in the Middle » Cats and More Cats

Recently, Lumos took up a new hobby. Toilet paper shredding. I had heard of this annoying issue with the tissue, but had never experienced it before. Now, if the roll is on the holder int he front bathroom (and sometimes even if it isn’t) this is what we get: 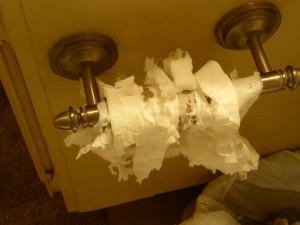 We say it is Lumos, but we have never actually caught him in the act of shredding,  But the little weirdo had a deep obsession with the front bathroom. If you are in there, he wants in. If you close the door on him, he sits outside and makes noise until you let him in. He even sleeps sometimes on the rug in front of the sink, which is always a surprise in the middle of the night, for him and for you.

Dax seems to be feeling better and he spends more time out and about with us. His ears appear to be almost problem free as he doesn’t shake his head very much anymore and ear scratching has stopped. However, all is not well as his nose is now bright pink for unknown reasons. I wish he could tell me what is wrong with him!!! But he now is out and about enough for us to play with him with a dangle thing on a stick and he even gets into it with the other cats at times, boxing, chasing, etc…..

Dax is a hard one to photograph. He runs from the camera. The first day or two he was with us I used the flash and he has never gotten over it. Now he seems the camera and leaves the room. Darn cat is too smart. I did manage to get a few new photos of our newest boy by sneaking up on him and not using the flash. Here they are. 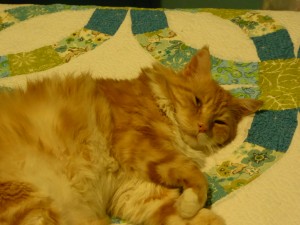 Look at that face and that fluffy fur! 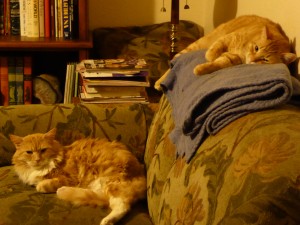 Two orange cats on the couch. One has short fur and the other has long.

Even though it is not winter weather around here, it isn’t 100 degrees. so I am in my “Nox on my lap” season. Nox is my boy and he prefers my lap at least 3/4 of the time. I love having my little boy snuggle with me. Little being relative. 14 1/2 pounds seems little when his two housemates are over 17 pounds each! I have heard rumors of adult cats who weigh less than 10 pounds. That has never happened in our house. Even when we get them as kittens, and have no idea how they will turn out, they end up being big boys.

Yesterday Eldest Daughter and I went to help with the deep cleaning at Room 8. It was nice to be there with lots of other people. All women. All who own cats. Hum, wonder why that is? In any case, I got to be around some of the new cats. Two in particular were memorable because they are very vocal. Both Rocky and Rosie were not pleased with the invasion of the premises and all the bustle and people that included.  Rosie was especially unhappy with the sound of the vacuum cleaner. Sorry I don’t have photos. I was busy cleaning!

Hope you are having a great weekend!

« And Now A Week Later… A Little Disney »

6 Responses to “Cats and More Cats”