Starting the New Year Off Like We Lived the Old Year

Today was January 2nd and we were off to the veterinarian. So, starting the year off as usual for  us, with pet problems. Dax has had ongoing issues with his ears and it isn’t going away. He has been treated for ear mites three different ways, so it was time to do further investigation. Sure enough, the doctor took a swab and looked at it under a microscope. Two types of bacteria and yeast as well. No ear mites at all.

They gave him a shot and gave me ear drops for him. Eight, yes eight. drops in each year two times a day. I just laughed and asked for a syringe. I figure I can put the eight drops in the syringe and squirt all of the medicine at once into an ear. Can you just imagine me trying to count eight drops into each of Dax’s ears? “One, two,…oops, and there he goes!”

The doctor said if the problem comes back, he would suggest treating it once more and then, if it persists, we will have to assume it is a food allergy and go from there. Oh goody!

We hope this makes poor Dax more comfortable. All we want is for him to lead a happy life at our house. Instead, it had been three months of annoyed ears! 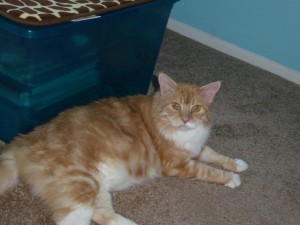 My ears are pink and itchy!