I needed a photo for my latest local history newspaper column. Unfortunately, the place I needed to visit was, according to Google Maps, an hour and nine minutes away. But, what the heck, it was a good excuse to get out of the house and take a Sunday drive. It would have been even better if there were more road signs but more on that later….

I wrote a story on a little place called Radec. Back in the good old days, a person could petition the United States Postal Service to start a post office, usually in their home or store. If approved, the post office would be given a name. However, the name could not be the same as any other post office anywhere else in the country.  This particular post office was located in an unnamed area in southwestern Riverside County (then northern San Diego County). The man who proposed the post office suggested the name “Cedar.” However, there was already a post office in Colorado by that name. So the man just flipped it and suggested “Radec” which is cedar spelled backwards. As was common, the area around the post office became known as Radec as well.

Radec was always an area of far flung ranches, never a town. So, with time, the name fell out of use. Now there is really only one thing left that bears the name, and that is the Radec cemetery. So off we went on our Sunday drive to find that little cemetery so I could take some photos.

We had to drive all the way down the 215 freeway to Temecula and get off on Temecula Parkway, which is also one portion of State Highway 79. Initially, there is lots of development in that area, which made getting gas and a bite to eat very easy. But soon the development petered out and we were on a two lane highway, driving through the back country. It may surprise people who do not live in southern California just how quickly you can find areas in our neck of the woods that are “the middle of nowhere.” 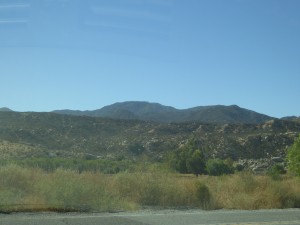 The views of the hills along the highway are very scenic.

The countryside along 79 is dotted with the occasional ranch, some of which are owned by people with lots of money. One large property had what looked like brand new white equestrian fencing all along the road and behind the fence were recently planted pepper trees, dozens of them. When the pepper trees mature they will block the ranch from the prying eyes of passing cars.

As you get futher south the rolling hills become very rocky, which makes for pretty views as well. If you keep taking 79 you will eventually be able to go to Julian, a picturesque town in the mountains of San Diego County. I told Hubby we should do that one of these days. But yesterday we were on a mission. Unfortunately, our mission kept being thwarted by a lack of road signs.  The road we were looking for, Sage Road, was, I thought, a fairly major intersection with 79, given that were were out in the middle of nowhere and all that. Well, it was apparently not major enough, and we blew right passed it, never seeing the one tiny road sign. The intersection was weird, in that it was not just a “T” but had additional diagonal paved areas leading to and from the highway. I am sure they are there to give the folks coming off of Sage Road a fighting chance to get on the highway when traffic is heavier, as the cars on the highway are going very fast! But because of the extras “wings” shall we say, it was easy to miss the one and only street name sign there, and we sure missed it. We knew we had a problem when we got several more miles down the road and saw the “San Diego County Line” sign. Oops! 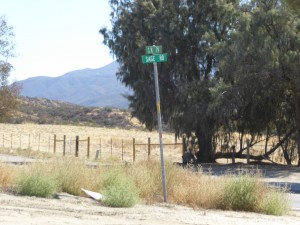 When one sign says “HWY 79″ and the other says “Sage Rd” you don’t get many horizontal inches of green road sign to look for. We totally missed this one as we went south and almost missed it when we turned around and came back by.

We turned around and I pulled out out my phone and manged to pull up Google maps once again. This worked well and we were able to find Sage Road, finally. However, once we turned, we couldn’t find the cemetery. The smart phone was only so helpful, as the cemetery was not showing up, and then we lost the signal. Did I mention we were out in the middle of nowhere? We turned around and regained the signal, and I called Eldest Daughter back at home to try and get some help, when, low and behold, I spotted an American flag. Photos online had shown that there was a flag pole at the cemetery so I was able to tell Eldest we were good and Hubby turned the car onto a short dirt road which took us to the cemetery. It sat  a bit off the road, not right on it. 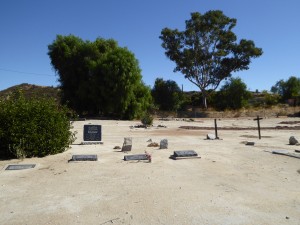 I have no idea when the first burial occurred, but there were headstones which indicated some folks were buried in this little country cemetery in the 1890s. 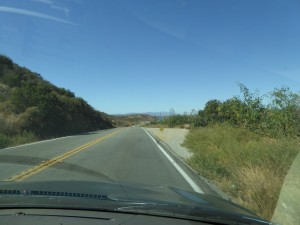 With our mission accomplished, we turned the car north and headed home on the lonesome highway once again.

One Response to “Day Tripping – Highway 79”