﻿ Woman in the Middle » What Truly Unites Us

What Truly Unites Us

At a time when we seem to be more divided than normal in this country, I have been thinking, instead, about what unites us. This Memorial Day I want to point out that what truly binds us together is those men and women who put their lives on hold, who found their lives changes forever, or who sometimes paid the ultimate sacrifice, by joining the United States military. 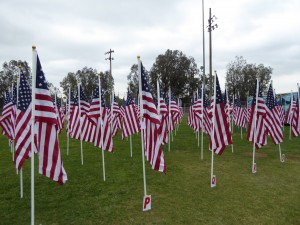 A photo of the Field of Honor held in a local park in my fair city a week ago.

In my own family my father and father in law were in the Navy. My uncle serviced airplanes in England in World War II. Men on my family tree served in the Civil War and I even have ancestors who fought in the Revolutionary War. But I also remember the stories I heard as I was growing up about people who were neighbors and friends and what they endured. There was my dad’s mentor and boss when he went into the real estate business who had a crippled hand that made him hold a pen in a funny way. When I asked my Dad about it, I found out this man had been in Pearl Harbor on the day that will live in infamy, and his injury came from swimming through water topped with burning oil. Or there was a friend’s father, who served on bombers stationed in England in World War II. For the rest of his life he would wake up screaming from the nightmares caused by what he lived through.

So, on this Memorial Day in 2017, I urge you to consider for a moment the many veterans you know in your own life and, just for a moment, feel yourself a part of the assembly, the gathering, the group, the crowd, the company, that we all are in this country – the people who know and support the veterans and the memory of those men and woman who have gone before, who played such a big roll in bringing us to where we are today.

3 Responses to “What Truly Unites Us”