﻿ Woman in the Middle » The Gov and Me

The Gov and Me

I am a politics nerd, in case you didn’t know. I majored in political science and public administration in college, and I have only missed voting once, when I was out of the country back when it was not as common to vote by mail. When I found out the California Governor would be in my fair city last Friday, I was very excited. My excitement was tempered when I found out that he would be attending an invitation only event to sign a bill. I am not the kind of person, in my old age, who wants to stand around someplace in the hopes of getting a glimpse of the Governor as he dives by.

But then the call came Thursday afternoon. As an elected member of our local parks board, I had been invited to the ceremony! I as so excited! Governor Jerry Brown is really an icon in American politics, not just California politics. He was first elected governor of California in 1974 when he was just 36 years old. He served two terms, then later ran for President, giving Bill Clinton a run for his money. He was mayor of Oakland, then state Attorney General, before being elected once again as governor. Like him or not, that is some resume.

It was exciting to be in the same room, hear the Governor speak (very off the cuff, by the way), and see him sign the bill to restore funding to my fair city, and the other three new cities  that had funding taken away almost six years ago. What a long fight that was, and we are happy that is finally over. And I am happy I got to be there.

Below is the Governor making a few remarks and signing the bill in City Hall. 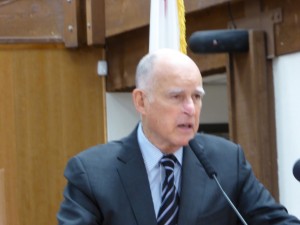 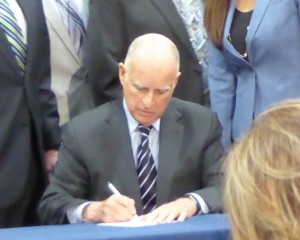 3 Responses to “The Gov and Me”