﻿ Woman in the Middle » Halloween in the Office

Halloween in the Office

Youngest Daughter was expressing disappointment that her office doesn’t do costumes on Halloween. I had already bought her an office appropriate Halloween shirt, because I figured that would be the case. But it got me to thinking about the various offices I have worked in over the years and what was done for Halloween.

Most places I worked didn’t do much, except maybe have a potluck. I would put on a Halloween pin and call it good.

The wildest place was my very first job. We didn’t dress up in costumes, but we did have a pumpkin decorating contest. Each section would vie to have the most unexpected and elaborate pumpkin display. To give you an idea, one year my section painted various size pumpkins as the planets and hung the entire pumpkin solar system from the ceiling.    There was a pumpkin Elvis one year, and a snowman made from white pumpkins. People from all over our 13 story building would come by to see the displays. Not a lot of work got done that day, but we looked forward to it all year.

I did have one work place that allowed costumes. It wasn’t official so we had to wait each year until a day or two before for the word to come down from on high that appropriate costumes would be allowed. It was fun, but also a little awkward as costumes can sometimes be a bit difficult to manage in a typical work setting. I went as a witch one year, but after that I just threw on a Halloween t-shirt and some sort of hat or headband.

What do you do (or what did you do) for Halloween at your work place? 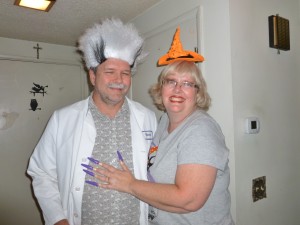 Hubby and I from a couple of Halloweens ago.

4 Responses to “Halloween in the Office”