The Grove is an open air mall in Los Angles. It is home to some higher end shops such as J.Crew and Michael Kors as well as unique stores such as the American Girl Place, the only one in California. There are a number of places to eat and that all important store to my family – a bookstore. The Grove has a HUGE parking garage that was a little weird and disconcerting to use, I will fully admit. Even my Hubby who commutes on California freeway every day to work (not for the faint of heart, I can tell you), found this parking garage a little C-R-A-Z-Y. As you are going up you have to merge out of the lane you are in, while going up a curve, diving between traffic cones, and looking over your shoulder to make sure no one is in the next lane over, coming up in your blind spot. That is why we parked on the sixth floor. It took that many floors for four adults to figure out what was going on and get the heck out of the lane that just took us up and into the lane that got us to parking. Whew!

In the middle of the Grove was a fountain that danced to music, like a miniature Bellagio fountain. I was a little puzzled was why it was dancing to “Last Dance,” which is over 30 years old. But I still love dancing fountains, even if they are dancing to music that came out when I was in high school.  We indulged while we were there with lunch at the Cheesecake Factory. Inside we admired the décor which, as Youngest Daughter pointed out, looked like most of it came from Lord of the Rings. The Cheesecake factory by us isn’t quite so fancy!

Below is the dancing fountain. 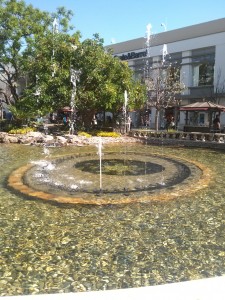 For dessert we skipped the cheesecake and stopped by Sprinkles Cupcakes instead. They were delicious!  We tried triple cinnamon, chai tea, Cuban coffee, and milk chocolate. Yum! Below is a photo of the cupcakes we got to choose from. 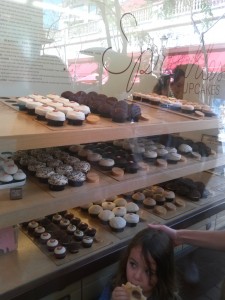 Right next door to the Grove is the Original Farmer’s Market. It is as different from the Grove as chalk is from cheese. 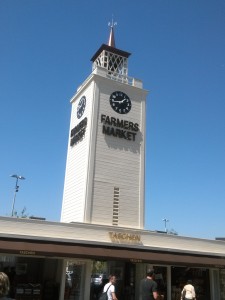 It is full of places to eat and had we realized that we probably would have skipped the restaurant.  You can get most anything there from Jewish deli to middle eastern, Asian cuisine to classic Mexican food. It is also a place where you can buy baked goods, fresh meat, fruit, vegetables, and cheese. It also has souvenir shops, galore. So you can pick up a roast, some fresh cheese, and a California magnet all at the same place! It is definitely a fun place to look around, although it is mostly outdoors as well so can get warm if the temperature is a little high as it was when we were there.

I noted on the map that there was a park across the street from the Grove. We didn’t have a chance to check it out but I was thinking we could have made a whole day of it between the Grove, farmer’s Market, and taking a walk around the park. Except for parking, which isn’t free,  this could be a relatively inexpensive day out. You could eat at the Farmer’s Market, window shop to your heart’s content, sit and admire the fountain, and then check out the park.

« A Quiet Sunday Morning It is a Lumpy World »