﻿ Woman in the Middle » Day Tripping: Hamilton Museum in Anza

I needed to do some research recently for a new local history book I am writing. I am looking into a murder which happened in 1901 and the granddaughter of some of the principal people involved in the shooting is still alive and is the force behind a small museum located in the rural community of Anza, in southwestern Riverside County. I don’t know about you, but I enjoy the opportunity to get off the beaten path sometimes, and visiting the Hamilton Museum affords just such an opportunity. 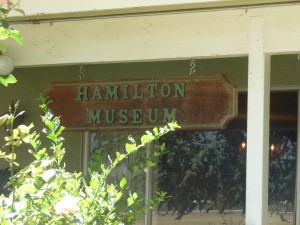 Anza is about a half an hour from the city of Temecula. The roads leading there take you through some interesting country with rocks and hills and the kind of rural scenery that is becoming more and more scarce in Southern California. The community of Anza has always been out-of-the-way, which is why it retains its rural flavor. It wasn’t until the late 1950s that an electrical co-op was formed in the Anza Valley, finally bring electricity and things like washing machines and dryers to the area.

The Hamilton Museum is devoted to preserving the history of Aguanga, Anza, Garner Valley, Lake Riverside, Pinyon and Terwilliger areas of Riverside County.  It is located on the Contreras property, and includes the John and Fanny Contreras house, built in 1924/25, which is decorated like a 1930 home.   In 1945 Lincoln Hamilton, Fanny’s nephew, bought the land and the house. He and his wife Louise later built a new home on the property in 1964.  The museum itself is located in newer Hamilton house. The property also includes a barn, left from the days when it was a working ranch, and a Native American garden which has plants used by the Cahuilla people.

Don’t be surprised when you pull up and find yourself in front of what looks like a house. It is the museum. Just go on in the front door where you can sign the visitor log and begin exploring the many items on display.

A view of the main area of the museum.

There are loads of photos and lots of information on area families and days gone by. Margaret Wellman Jaenke is likely to be there when you visit. She is a walking encyclopedia of information on the area, the force behind the museum, and a descendent of many of the families you will learn about at the Hamilton Museum. Margaret has also written a number of books about the area which are for sale at the museum or on the museum website. 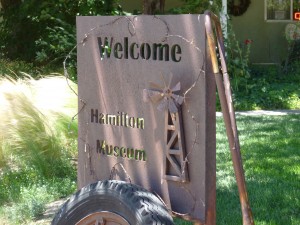 Anza is home to a Dairy Queen (56265 California 371), some mom and pop eateries, and to the Cahuilla Creek Casino (52702 California 371). The casino has the Roadrunner’s Bar and Grill in case you get the urge to gamble, eat, or both while you are in Anza. I didn’t stop at any of these places so I can not personally recommended them, but I did want you to know they are available.

The museum is open  Wednesdays and Saturdays 10-3.