﻿ Woman in the Middle » Decorating a 2013 Rose Parade Float

On Friday December 28th I traveled down to Pasadena to once again help with decorating the Cal Poly Universities Rose Parade float. This is the second year my daughters and I (and some of their friends) have gone down to help with decorating. As always it was fascinating!

Last year, we went on the 27th and on that day they are still working more on processing materials, not actually getting the float decorated. You can read about my adventure last year here: http://womaninthemid.com/2011/12/28/decorating-a-rose-parade-float/

What a difference a day makes! During the four hours we were there people were swarming over that float like a bunch of ants! Eldest Daughter and Brianna, the friend that went with us, were braver than Youngest Daughter and I. They agreed to go up on the scaffolding. You can actually see their handiwork on the Cal Poly float if a shot of the rear of the float ends up on television. See that penguin on the back? They put the orange marigold bits on its beak, added the line of black beans on the beak, and put the black “surprise” lines over the penguin’s eyes. In the photo below of the penguin’s face the beans on its beak are halfway done. Doing just what I mentioned took the girls about two hours! Decorating a Rose Parade float is a tedious and exacting process!

Here the girls are putting dried, pulverized, marigold flower petals on the beak of the penguin. The box is used to catch material that didn’t stick to the glue to both keep it off other parts of the float and to catch it for reuse. 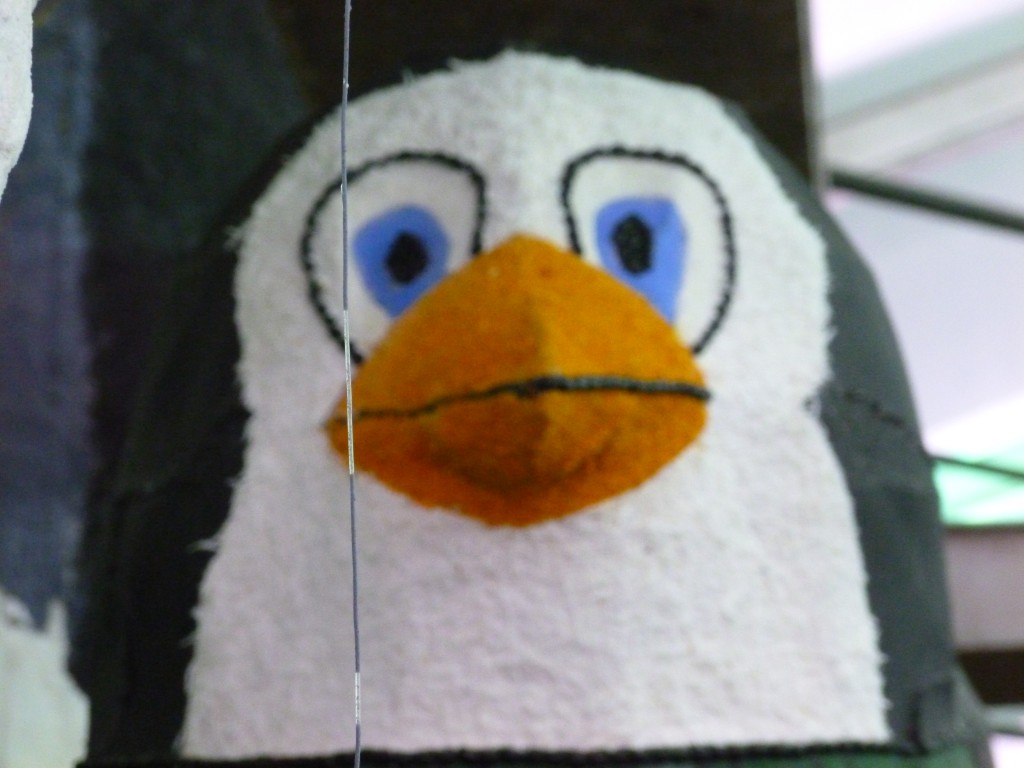 I am afraid that what Youngest Daughter and I did will never be seen by TV cameras but it was important none the less, or at least that is what they told us. It is a fact of life that you really only see one side of these amazing floats but both sides are decorated and seen by thousands of people on the parade route. Since the theme of the Cal Poly float includes penguins and ice, they use lots of white rice to get the snowy effect. They put rice in a blender and grind it up into finer bits. That is what YD and I were putting on the float.  All those smaller cracks of ice you see in the photo below were done by us! Whoo hoo! It was harder than you might think because all of the poppy seed was already applied and it was next to impossible to get the white rice on without getting poppy seeds in it, but that is a big no no! 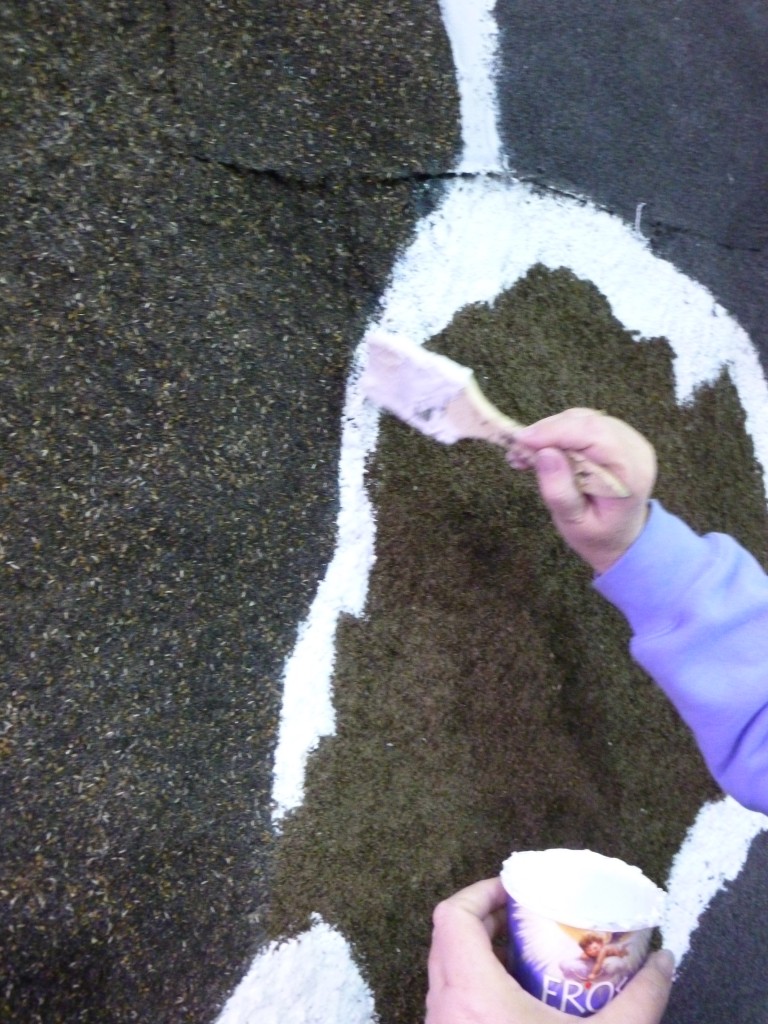 I was the glue person. Here I am applying glue to the cracks of “ice.” 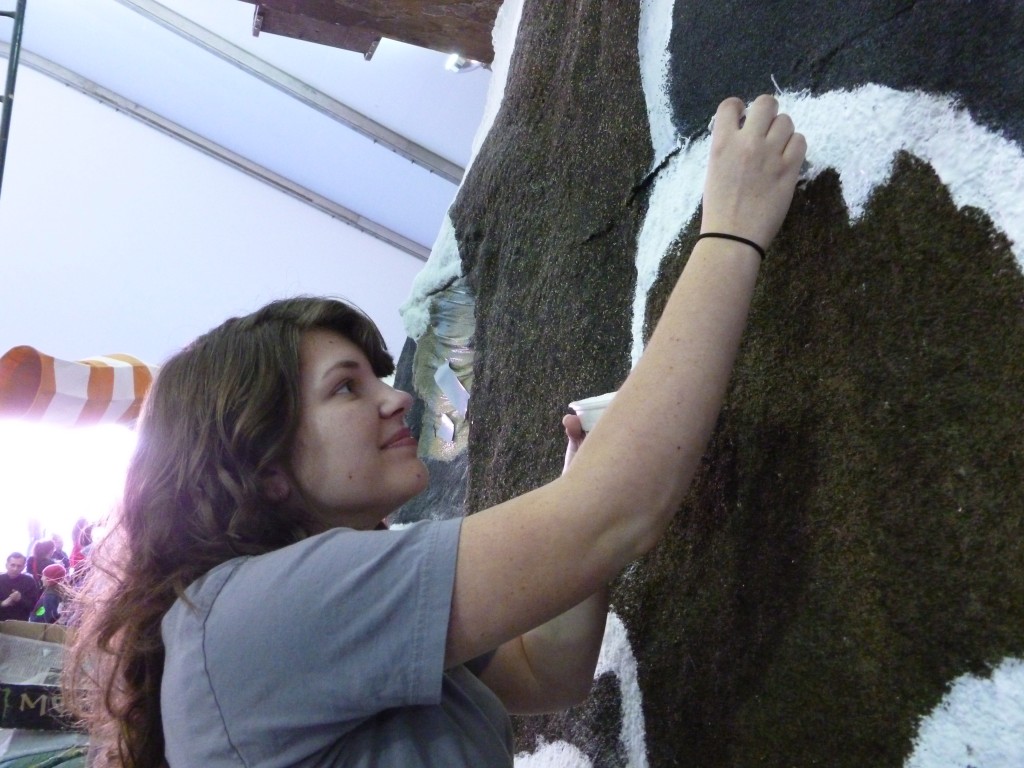 Youngest Daughter is putting ground up rice on the float.

As I worked on the float, rice rained down on me as people worked on areas above me. I also was blowing at the area we were working on to remove stray rice powder from the brown areas. That would blow lots of rice back into my face. By the end of our session I had rice all over my face and in my hair.

After a little lunch YD and I decided a sit down job would be good. We joined some other people separating the leaves of the Silver Leaf plant from its stalk. We then sized the leaves and laid them out on either paper towels or newspaper, ready for someone to apply glue and place them on the float. Can we say tedious? The sliver underside of these leaves are used to portray silver metallic areas such as the ladder and the fan on the float. Based on what I heard, applying the silver leaf is one of the more tedious jobs as it is a difficult material to work with, dries out fast after it is taken off the stalk, etc…Harder than white rice bits? I was surprised! 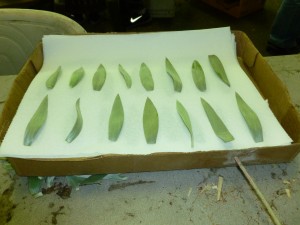 While Youngest Daughter and I sorted leaves, Eldest Daughter and Brianna went back up on the scaffolding, even higher than before, to work on some touch up before we finished for the day. The are much braver than I am! 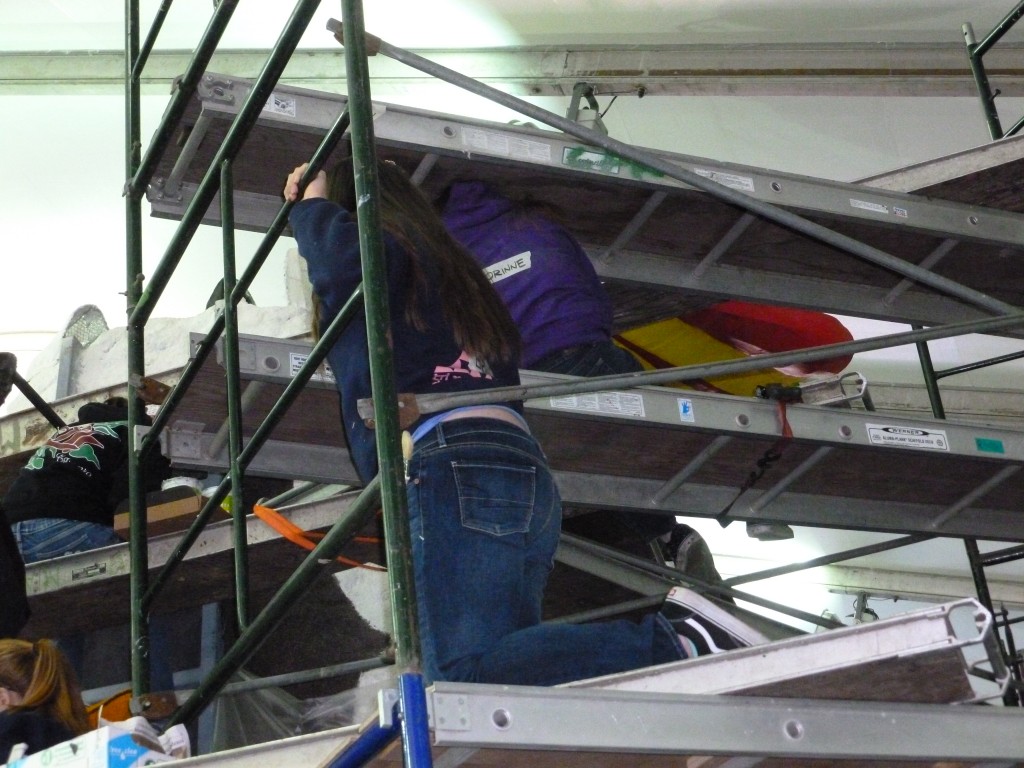 Brianna and Eldest Daughter (the purple sweatshirt on the right) trying to position themselves on the scaffolding in order to reach the area they were supposed to work on.

I took more pictures, including photos of the other floats that were in our giant tent. I will show you those in my next post. This post is certainly long enough already!  But before I end this I want to wish all of you a HAPPY NEW YEAR!

UPDATE: We are so excited because the Cal Poly float won the Bob Hope Humor award! Those kids work so hard on their float all year, coordinating between two schools, doing fundraising and even growing some of their own flowers! The award was well deserved!!!!